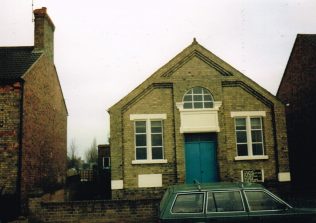 Keith Guyler’s notes which accompany the photograph say that the Walton Primitive Methodist chapel closed in the 1960s.  It accommodated 130 and at the time of the Keith Guyler photograph is a gospel hall. On Google StreetView in 2009 it has been demolished and is a building site. By 2012 houses have been built on the site.

The opening preachers at the services on August 9th 1835 were G Tetley and W Catliff.