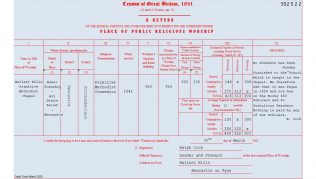 Mr. W. Clowes missioned Ballast Hills in the summer of 1822, on his first arrival in the neighbourhood of Newcastle-upon-Tyne.  Great numbers attended the preaching, many of whom were converted to God, and a good society was soon formed.  And there being no place of worship in that densely populated neighbourhood, the friends contemplated building a chapel in the year 1823, but could not obtain a suitable site of ground.

A small room was rented for two years, and then two rooms were laid together.  But this place being very low, and in other respects incommodious, the progress of the society was seriously retarded.  The work, at times, broke out in a powerful manner, but from the want of room, no very considerable increase was realized.

In the year 1829, a sabbath school was begun, which soon increased to two hundred and fifty scholars; and then no more could be admitted.  Strenuous efforts were made to obtain a plot of ground, but without success.

In the year 1840, Sir M. W. Ridley disposing of part of his estate, we obtained a site in a very eligible situation, but at the enormous price of .twelve shillings a square yard.  Unfavourable circumstances, however, prevented us from beginning to build till July, 1841.  And many, during this trying time, confidently predicted that a Primitive Methodist chapel would never be erected at Ballast Hills.

On the 17th of July, 1841, the .foundation stone was laid by Mr. R. H. Haggie, of Gateshead ; and a powerful sermon preached to a large and interested audience, by Brother Joseph Spoor, from Darlington.  The collection amounted to five pounds.

Previous to this, a very active canvass for subscribers had been commenced, chiefly by Brother R. Cook, leader and local preacher.  His masters, “The Broad and Crown Glass Company,” presented him with ten pounds to begin with.  C. J. Bigge gave, five pounds.  The two members for the borough, W, Ord, Esq., and J. Hard, Esq., two pounds each.  R. I. Shafto, Esq., of Bavington Hall, kindly sent us ten pounds.  The aldermen of Newcastle, and nearly all the members of the common council, contributed liberally.  So before the opening of the chapel, more than one hundred pounds was obtained.

The opening services, November 14th and 15th, 1841, were conducted by Brothers James Watson, from Darlington, and William Eckersall, from South Shields.  And on the following Sabbath and Monday evening, by W. and A. Dent, R. S. Stanley, Wesleyan local preacher, and A. Lynn, minister of the Methodist New Connexion.  The collections amounted to sixteen pounds six shillings and fivepence.

The chapel is fifteen yards by twelveinside, and sixteen feet high from the floor to the ceiling.  It has seven large windows, opening at  their tops; and eight beautiful gas-lights.  There is a neat porch at the entrance, with two  doors opening on each side into the iles.  There are seventeen pews: the singers’ pew in the centre, and four on each side, raised a foot from the floor; and eight in the front, which rise one above another.  The chapel will seat four hundred and fifty persons comfortably.

The total cost has been five hundred and sixty pounds; of which sum two hundred pounds have been raised by voluntary subscriptions.  And a number of friends have undertaken to pay two hundred and forty pounds by monthly instalments.  So the whole debt remaining on the chapel will be only one hundred and twenty pounds.

The chapel is strictly Connexional.  And since the opening, the attendance has been very good; and there has been a marked improvement both in the society, the sabbath school, and pecuniary matters.  To God be all the glory.— Amen.

(Approved by the Circuit Committee.)

A gallery was added to the chapel in 1853. In 1892 it became part of the new Newcastle Third Circuit.

The chapel was in existence until 1955.

Where was the chapel?