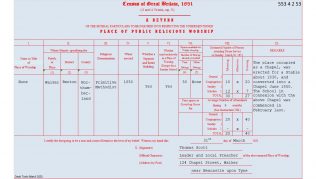 zoom
Walker: Return from the Primitive Methodist chapel in the 1851 Census of Places of Public Religious Worship
transcribed by David Tonks

The Return from Walker Primitive Methodist chapel in the 1851 Census of Places of Public Religious Worship tells us of  great change. The building where they met had only just been converted into a chapel in June 1850, having formerly been a stable, and they had recently started a Sunday school.

In an 1870 Primitive Methodist magazine article updating on the development of the Connexion in Newcastle, WR Leighton tells us about the recent opening of 4 chapels.