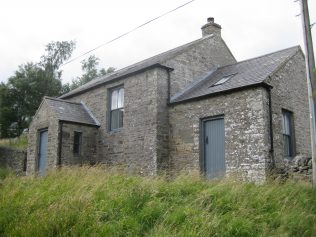 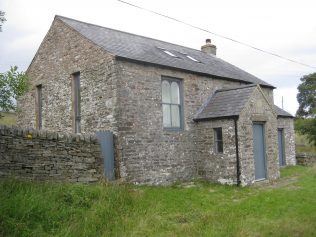 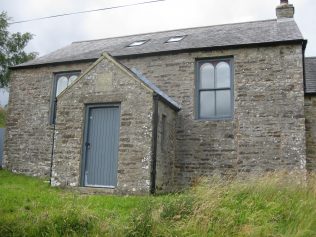 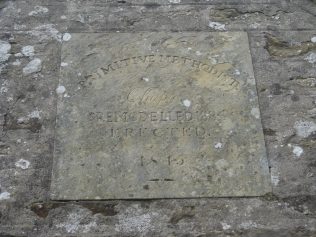 zoom
Note the spelling of the word chapel 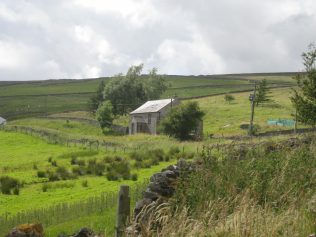 zoom
Photo of Swinhope Chapel in the distance 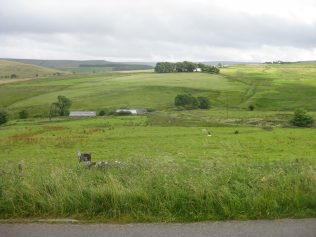 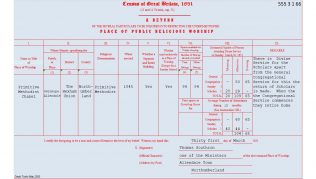 zoom
Swinhope: Return from the Primitive Methodist chapel in the 1851 Census of Places of Public Religious Worship
transcribed by David Tonks

In 2015 Swinhope is an isolated hamlet. Once a thriving lead mining area the families here would have attended the tiny Primitive Methodist chapel. Today in 2015 the chapel (now a house) sits on its own overlooking the surrounding countryside.

However, this chapel is remembered for events which took place in 1849. Most of the people in the Allen Dales were employed in the lead mining industry. As this grew so did Methodism and as many as 20 chapels were built in the Dale Swinhope being one of them.

W.B.Mines of Allenhead employed many of the men and in 1849 they introduced new policies to increase yield and so ensued a disagreement between miners and management. After 5 months no agreement was reached and the managers of the mine replaced the miners with labour from nearby Alston. Tension escalated into a confrontation against the ‘black leg ‘miners and so the mine managers black listed the striking miners from ever working in the north east. The result was that in June 1849 the black listed miners and their families left for America to work in the lead mines of Wisconsin and north east Illinois.

During this time feelings ran high and the Methodists were very much involved and in March 1849 a meeting was held in Swinhope Chapel. As was usual in a chapel the meeting began with a hymn and a prayer and then the chairman began his tirade against men who had not joined the strike. He encouraged the meeting to do all in their power to harm the strike breakers and their families whether it be in words or actions. To quote George Dickinson ‘Allendale and Whitfield’ – ‘If they be sick do not visit them; if they are in need of a doctor do not seek them one; if they die do not bury them; if they are fastened underground in the mines do not assist in seeking them out but let them die or be killed in the dark’. The chairman also went on to say that he hoped no tradesman would serve them. These were certainly not words to be expected in a chapel. Outside the area of Allendale hardly anyone had heard about the strike and at the quarterly circuit meeting the officials were demanding more reasons than the strike for the decrease of 21 members! Ten years later a revival in the area increased membership and Swinhope like other chapels benefitted from this.

From the Primitive Methodist magazine of January 1846 (page 30):

“Swinehope- Shield—On the 26th of the last month we opened a very neat chapel at Swinehope-Shield, in East Allendale. Its size is 32 feet by 24, and 12 feet high from the floor to the ceiling ; it is covered with blue slate, neatly fitted up with pews and forms, well lighted, and furnished with a very neat stove.

The land on which it is erected is freehold, and was given to us by Mr. Joseph Philipson, of Swinhope Shield. Much labour was rendered gratuitously by the inhabitants of the neighbourhood in stone-getting, lime – burning, leading, &c. The whole outlay in its erection is about 102/., towards which more than 40/. have been begged.

Three powerful sermons were preached at its opening by Mr. T. Jobling, from Westgate circuit, and Mr. T. Parker, from Hexham circuit ; and the congregations were good, and collections liberal. Since the opening all the seats are let and paid for, and there is every prospect that the chapel will do well. On the 9th inst. we commenced a Sunday-school in it, and nearly a hundred children attended as scholars. Praise the Lord! W. Lea”