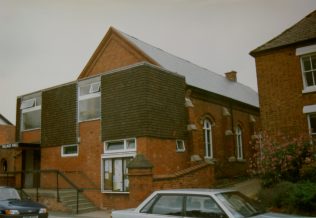 n 1840, when the Primitive Methodists built a chapel in Brown’s Lane,

The Primitive Methodists had a chapel built here in 1836 in College Street.  In Google Street View a carved stone in the new boundary wall says “Primitive Methodist Chapel 1836”.  There is a picture on the Picture the past website.

Keith Guyler’s collection of pictures contains two former East Bridgford Methodist chapels next to each other in Main Street.  The earlier, smaller building has been identified by David Atkins (see the comment below) as the first Wesleyan chapel and has been transferred to the My Wesleyan Methodists website.  It is now used as a house.

The later, much larger building on the second picture was identified by Keith Guyler as a Primitive Methodist chapel.  David tells us that this was originally the Temperance Hall built by the Good Templars in 1883 for meetings and concerts.  It is  is used as a community hall.

This may not be the full story … … Nottinghamshire CC Inspire picture website contains an image of the Hall labelled “Showing to the left, the ex Primitive Methodist Chapel.”

Can anyone confirm or explain?  Prims and temperance were frequent companions.