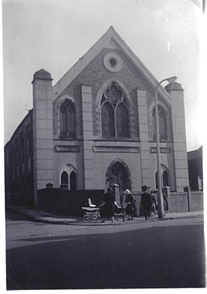 zoom
the former Bourne Primitive Methodist chapel, Kirkby in Ashfield, as it was in 1959
Roger Drew 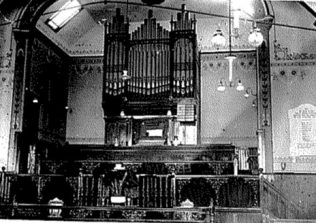 zoom
inside of Bourne chapel showing the organ
Roger Drew

zoom
1973 Newspaper article re the planned demolition after Meridian moved out. The annotation is Roger's mother noting that she was married there and that her three children were christened there.
Roger Drew 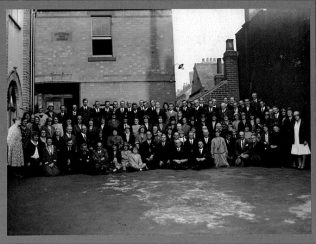 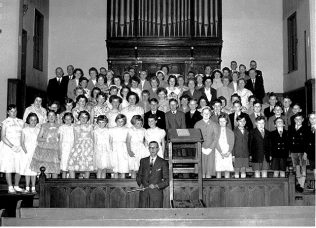 In the 1866 Primitive Methodist magazine, A Branland tells us that the Primitive Methodist society at what was then known as Kirkby Folly in the Mansfield circuit bought 66 yards of land for £34 and started to built a chapel.  The stone was laid by J Wild and preachers included S Reddish, J Wild, A Beanland and J Wileman.

Interestingly, there is no entry in a subsequent magazine about the chapel actually opening.

Thanks to Roger Drew for linking Kirkby Folly to East Kirkby, now part of Kirkby in Ashfield.  The chapel became Bourne chapel in Prospect Street, south of its junction with Low Moor Road.  Roger has ben exploring diaries kept by his grandfather, Gordon Parkin, who with his wife Ethel was actively involved in the chapel and tells us more of the story:

“The Bourne Primitive Methodist Chapel in East Kirkby (now Kirkby in Ashfield) was erected in 1876. The words “erected 1876” were included on the front wall. They are clearly visible in a photograph from 1924 which appears in the book “Kirkby & District from Old Photographs” by Frank Ashley, Sylvia Sinfield and Gerald Lee.

An extension for the Sunday School was built in 1907 as part of the centenary celebrations of the Primitive Methodist Church. The building was closed for renovations in 1924 and it seems that this date was also included on the front of the building.  According to Edith Searson who wrote a book of reminiscences about her time at the chapel, the chapel gained the name Bourne sometime after she and her family joined in 1917.

Bourne amalgamated with the Methodist (formerly Wesleyan) chapel on Diamond Avenue in 1959 under the name Trinity and an in principle decision was made that the Bourne chapel building  would close. Services ceased at some point after that. Gordon noted that the last service was in January 1961 but his daughter (my mother) Sheila Drew (nee Parkin) noted that my brother, Alan, was christened there in August 1962. The building was certainly closed by the end of 1962. The pulpit, which had been donated by the family of EA Bird in 1932 in memory of William and Mary Bird, was transferred to the renovated Trinity chapel in Diamond Avenue. The building [complete with the underlying mineral rights]  was sold to a hosiery company called Meridian. Gordon was a chapel trustee and he noted that Meridian paid £5,750 for the building. They used it until 1973 when they moved to new premises and the chapel building was demolished. “

You can read more of Roger’s account of life at the chapel through his grandfather’s diaries in the attached document.

“Kirkby & District from Old Photographs” by Frank Ashley, Sylvia Sinfield and Gerald Lee: A preview  including the 1924 photograph is available on https://www.google.co.uk/books/edition/Kirkby_District_From_Old_Photographs/1neIAwAAQBAJ?hl=en&gbpv=1&printsec=frontcover

“I Remember” by Edith Searson