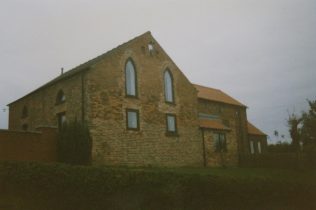 Laxton is unique  as it is the only remaining working “open field” farming village in Europe still operating this ancient system.

The notes accompanying Keith Guyler’s photograph of Laxton Primitive Methodist chapel date its use from 1910 until the 1990s.  The building was actually significantly older than that.  It was a Congregational chapel in 1802, rebuilt in the late 19th century and sold to the Primitive Methodists around 1910.

After closure it became a private house.