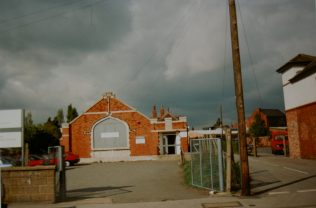 The building has the same design as the nearby Blidworth Primitive Methodist chapel.