You are here: HomenextChapelsnextNottinghamshirenextQ - ZnextRadcliffe on Trent Primitive Methodist chapel 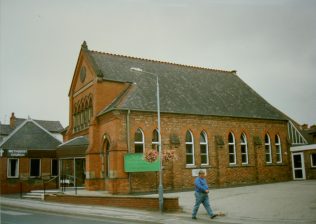 The first Wesleyan meetings were held before 1791 in Baker Beeson’s house on Mount Pleasant, and the first chapel built on an adjoining site in 1796. Other branches of Methodism – the Primitive and the Independent Primitive (who objected to paid ministry) – were also established in Radcliffe during the early 19th century. In 1864 the Primitive Methodists purchased the Independents’ former chapel, which had been created on the site of three cottages on the east side of Mount Pleasant, and survived in Radcliffe until at least 1862.

A new Primitive Methodist Chapel was built on Shelford Road in 1893. Other chapels eventually closed, but the Shelford Road premises remain as the only Methodist chapel in the village.