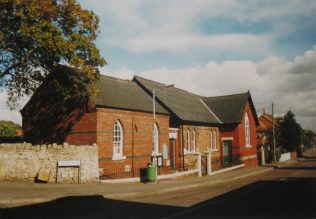 Keith Guyler’s photograph shows two Primitive Methodist chapels at Ranskill. His notes say that the first was built in 1847 and the second in 1897.  However, a panel between school and chapel carries a building date of 1868.

The part nearest the camera was the Sunday school.  Google Street View in 2009 shows it for sale, with the front wall  temporarily supported.  Later photographs show it being converted to another use – but to what is not clear.