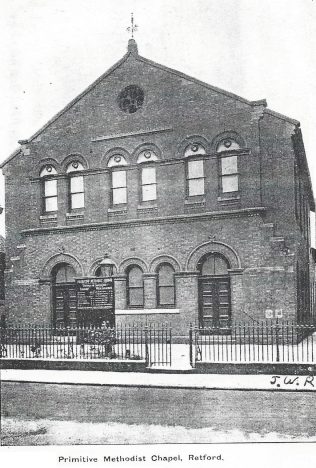 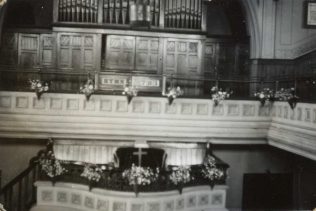 zoom
Interior of Retford Chapel, probably taken in 1948 on the occasion of a wedding.
Martin Lazell

Retford Primitive Methodist chapel in the Retford branch of the Scotter circuit was opened in February 1841. The new chapel was a former theatre purchased for £425 and converted for a further £135.

Preachers at the opening included William Antliff, William Garner and Mrs. Longmires. The occasion is reported in the Primitive Methodist magazine by I Broadbent, transcribed in the attached document.

On April 15th 1869 a foundation stone was laid for a new chapel on Carolgate, in the centre of Retford. James Parkinson tells us that Mr G R Rex, who gave £25, Miss A E Clayton, who gave £20, and Mr E Plant, who gave a new clock, each received a beautiful trowel and a mahogany mallet for laying the memorial stones and their gifts towards the new church.

The opening of the chapel which measured 52’6″(l) 43′(w) 26’10” (h) took place on December 4th 1870. Again Mr Parkinson reports it. Rev W Antliff DD, Principal of PM Theological institute, Sunderland preached to 1,070 people.- is that the same W Antliff who preached at the opening of the previous chapel?