A tale of early persecution, 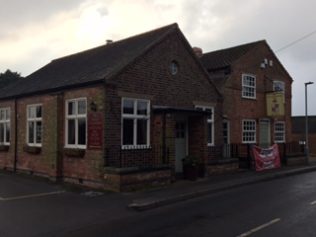 Shelford Primitive Methodists found it difficult to establish themselves in this village. The village was a part of the Earl of Chesterfield’s estates, (many of the local inns, including in this village, are known as the Earl of Chesterfield) and at various times his agent took very strong measures against them. Work done by the Southall and Nottingham Church history project outlines this history, and these difficulties.

There was a group of Primitive Methodists in the village in 1817, but it is recorded that the Earl of Chesterfield’s agent demolished those cottages where they held meetings. There was no land available to buy so they resorted to bringing a ‘floating chapel’ down the river Trent and drawing it into a garden. It was not until 1840 that they were able to purchase land, a small plot adjacent to the Earl of Chesterfield inn, capable of seating 122.

This chapel has been clearly rebuilt, and when worship ceased in the 1970’s, the site was bought back by the public house next door. The date stone is preserved in the parish church.

The records for the chapel are held by Nottingham archives for 1874-1873.

The neighbouring hamlet of Newton had a Primitive chapel from 1844, closing in 1853. This appears to have been demolished.