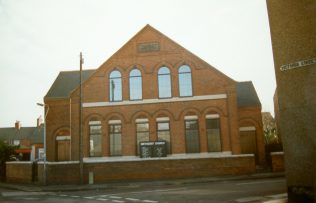 The first chapel was in New Lane, Stanton Hill, SUTTON-IN-ASHFIELD, NG17 3GD.  The date still readable on the front of the building shows that it was built in 1876.  The cost was £338 and foundation stones were laid by John Pickard and Robert Fletcher.  It is now used as a garage.

The chapel in Albert Street, the next street in the grid-iron street pattern, was opened in 1908 at the junction of Albert Street and Victoria Street.  Keith Guyler’s photograph shows that it was still open in 1998,  but has also since closed.   Google Street view in 2009 shows the front wall held up by scaffolding and the building without a roof.  By June 2015 it has been replaced by new housing.