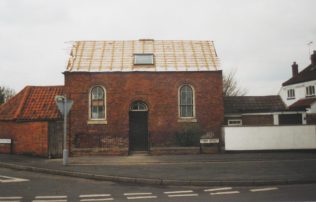 The notes accompanying Keith Guyler’s photograph say that Sutton Primitive Methodist chapel was opened in 1879 and closed in the 1980s.  At the time of the photograph it was being converted into a house.  On Google Street View in 2011 it is for sale.

It was very small, with accommodation for 35.