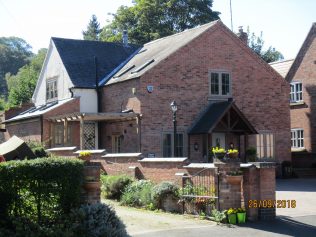 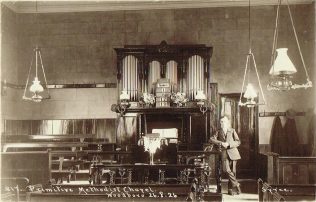 Known as the ‘West End Chapel’, because it was at the west end of Main Street, it was opened in 1851. It was extended in 1871, and an organ installed, and it was enlarged and a schoolroom added in 1900.

In 1962 the congregation joined with the former Wesleyan Church, and the building was sold, and converted in 1973. Initially it became a petrol station but has since been converted into residential use and extended – Chapel Cottage.

On the back of the postcard, produced in 1926 to celebrate the new heating, is written – Hymns: Before Jehovah’s awful throne; Lord, Thou hast searched and seen me through; The spacious firmament on high; Father, how wide thy glory shines.  Presumably these relate to the numbers on the hymn board.