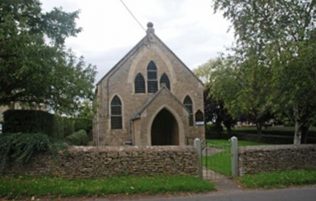 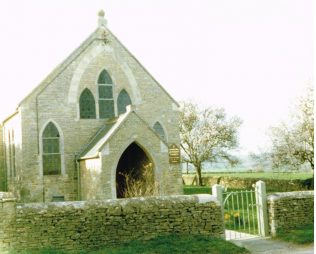 Keith Guyler’s notes say that the chapel in his picture was opened in 1904. The Churchill and Sarsden website says that the chapel was opened at Easter 1927 by Richard Cadbury of chocolate fame, on a site donated by David Crudge, a local farmer. The stone came from Chadlington. The iron gates were made by Charles Blake the village blacksmith and the chairs were made from trees grown in Churchill.

This chapel is in Kingham Road OX7 6NE and still active in 2017.

On the Ordnance Survey 1:2,500 map of 1881-7, the Primitive Methodist chapel is marked on what is shown on Google Street View in August 2016 as an unmade Road branching off Sarsden Road roughly parallel with Junction Road.

The Primitive Methodist magazine for October 1853 gives an account by J Herridge of the opening of Churchill Primitive Methodist chapel in the Witney circuit. Churchill is described as a large village with only thee parish church, the Wesleyans having failed to establish a society there. It was missioned by the Prims in early 1852 and despite the “ignorance and malevolence of the policeman with the opposition of those in higher authority”, Mr Gardner first had his yard and premises licensed for preaching. and then gave part of the yard to build a chapel. Opposition grew stronger and two members and a n umber of Wesleyans who also attended Prim meetings were turned out of their jobs.