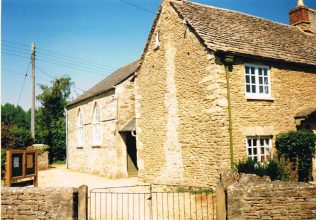 The Filkins and Broughton Poggs website in 2015 declares that the Primitive Methodist chapel in Filkins was dedicated in 1833 on Whit Sunday and the event is celebrated each year with a special service.  In an ex Primitive Methodist family in Wiltshire in the 1950s and 1960s, this was one of the traditional events to attend.

The 1833 date might be an error. The chapel carries the date 1853 and the Primitive Methodist magazine for October 1853 contains an account by George Lee of the opening of the chapel on Sunday August 28th 1853. The village had been first missioned some thirty years previously when the evangelists slept under hedges and hayricks.

Brother and sister Gosling of Broadwell opened their house for meetings, the first in the area, and in May 1853 a cottage was purchased and set up as a chapel. Opening sermons were preached by Mrs Lee and George Lee.

It had room for 50 people, was built of stone and slate and cost around £40.