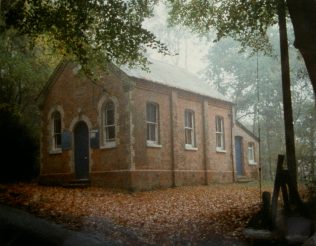 The first Woodcote Primitive Methodist chapel was opened in 1881 and was replaced by the chapel in the photograph in 1886.  The first chapel was demolished and in 1972 the site was used as a car park for the 1886 chapel.

The chapel closed in 1989 and in 1990 Keith Guyler notes that it was unused but with planning permission for light industrial use.  Nevertheless, later photographs including Google Street View in April 2011 show it used as a house called, inevitably, The Old Chapel.  The former factory just up the road has also closed by this point.