You are here: HomenextChapelsnextScotlandnextEyemouth Primitive Methodist Chapel (i) 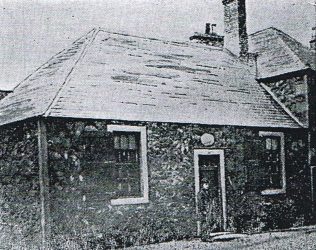 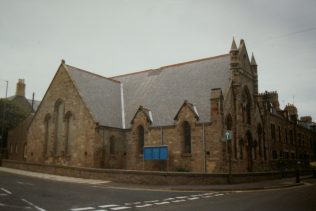 Primitive Methodism first came to Eyemouth in 1830, ‘armed not with learning, wealth or social prestige, but fired with an all-conquering enthusiasm of hearts set aflame with a free, full and present salvation’.

The first missionary was William Clough, who first arrived in Berwick-on-Tweed in 1829.

It was not until 1834 that a society was formed in Eyemouth. Members met in each others’ houses, and services were held in the remains of an old soap works in Chapel Street.

In 1835 the Circuit minutes record that ‘Lister, Tait and Chamberlain be appointed with the brethren at Eyemouth to look after a room (or if Providence open the way, to build a chapel) to preach in.’  It was also proposed to hold a Camp Meeting between Eyemouth and Berwick ‘if a suitable piece of ground can be got’.

Encouraged by the members, William Lister approached Adam Robertson, a retired ship’s carpenter, about a piece of land near St Ella’s Place, to build a chapel. Robertson was sceptical about the venture, thinking that Primitive Methodism would not last, but eventually agreed to give them the land on a 99 year lease, at a rent of £4 per year, but the first 20 years were to be rent free.

The foundation stone was laid on 5 August, and the chapel completed in October 1835. The members helped to build it, and Mr Fulton, of Fulton Mains (whose son later became the minister of the Berwick circuit), carted all the stones for the building.  It cost £80, and having managed to raise £30, they were left with a £50 debt.  They borrowed the money from William Purvis, a farmer, and one of the Trustees. The other trustees were George Dougal, Joseph Chamberlain, John Inglis, William Dougal, Andrew Dougal, Robert Turnbull, Thomas Spouse, William Brown, James Robertson, Robert Dougal, William Fulton and William Lister.

There’s an account by W.L. of the opening in the Primitive Methodist Methodist magazine – note added by CH 05/17)

George Dougal was a fisherman, and the first local preacher in Eyemouth. He was in great demand and planned to preach every Sunday, often walking 40 miles or more.  He died at sea, and his four children became staunch supporters of the church.

Joseph Chamberlain was a young man from Berwick, who was eager to help the people of Eyemouth with their new church. In September 1835 he was called by the Circuit to become a travelling preacher. He was then ’21 years of age, 3 years in society, single man, 1 3/4 years local preacher, of promising talents, deeply pious, souls have been brought to God by him, has been useful in the Circuit, no smoaker of tobacco, no engagement for marriage, not embarrassed [i.e. not in debt]’.

Robert Turnbull was a tailor. He married Nancy Inglis, one of the first to join the Primitive Methodists, much to his displeasure. In fact, he threatened her with bodily harm if she persisted in attending the meetings. Her manner of life was such that even he was forced to admit there was ‘something in Methodism’. After his conversion he became one of the most enthusiastic members.

The chapel became known as ‘The Old Barque’. The members were few and desperately poor. They were often unable to pay their ministers. William Lister (who eventually became President of Conference) often walked and preached all day, with only a drink of water and a penny roll to sustain him. 5d a day was allowed for meals, and then the ‘meat bills’ had to be presented to the Quarterly Meeting, while blankets for the single ministers and to be ‘good and cheap’.

Their faith was a source of great joy, and they loved singing rousing choruses, punctuated by triumphant shouts of ‘Glory’ and ‘Hallelujah’.

In 1848 there were only 10 members, and by 1859 it looked as if the chapel might close. John Snaith was sent to Eyemouth, and ‘a tide of Salvation swept over the village, and people flocked to the services from as far as Duns’. The revival which followed, lasting 6 weeks, saw more than 600 people converted.

In the 1870s another revival under John Reed was so successful that in 1876 Eyemouth separated from Berwick to become its own circuit.

On Friday 14 October 1881, a terrible disaster occurred. Eyemouth lost most of its breadwinners, as 129 fishermen were drowned in a storm. Among them were 25 Primitive Methodists members, and many others who attended the church. They left 19 widows and 90 fatherless children. The church was left with only one ‘praying man’ who could provide any sort of leadership. Unable to recover from this blow, in 1893 Eyemouth rejoined the Berwick circuit.