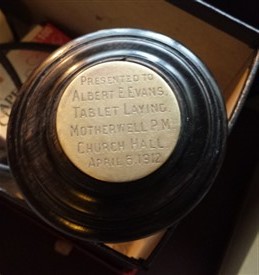 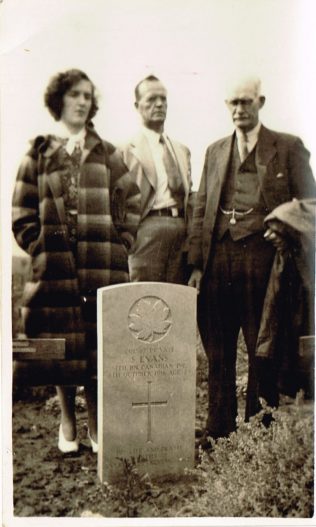 zoom
Albert with his son Enoch and grand daughter Irene, taken in 1938 at the graveside of his son Sam Evans, who was killed in World War 1
Ross Parker

There was a society of Primitive Methodists meeting for worship in Motherwell as early as 1848, as part of the Glasgow Mission.

In 1852, the influx of the Glasgow Iron Company’s English workmen gave a boost to the membership.

At first, services were held in a School in Milton Street, before the first church was built at the corner of Roman Road and Milton Street in 1858 at a cost of £400. It was later enlarged so that by 1902 it could seat 550.

There is more information and a picture of the interior here.

One of the foundation stones of a new hall was laid by Albert Evans in April 1912, as you can see from the photos and comment below.

Memorial stones for a new church in Hamilton Street, on the corner with Avon Street, were laid on 2 September 1911 by Her Grace the Duchess of Hamilton; Thomas Rolinson, Esq, JP, of Hurlett; J Duncan Miller, Esq, MP; Sir William P Hartley, of Southport; and Andrew Swire, Esq, of Colne, Lancashire.

The new church was opened in August 1912, with Rev J W Chappell performing the opening ceremony. The old church was purchased by Dalziel Co-operative Society, a new front was added, and it continued as a shop until the 1960s. The building was demolished in 1981 to make way for flats.  Does anyone have a picture of it?

Albert Evans emigrated to Canada in 1921 to live with one of his sons in Toronto. He was given a special send off. ‘On Friday evening last the trustees of the Primitive Methodist Church met at a happy social function to express their appreciation of Mr Evans splendid service for the church during many years. Mr Evans came to the town from Shropshire over thirty years ago, and has been actively associated with the Methodist Church during most of that time. After tea was very daintily served, the Rev Will H Campbell introduced the purpose of their meeting in a fine eulogy of the personality and staunch integrity of Mr Evans… It was specially remarked that through his devotion and generosity, the entire electrical installation of the church and hall was fitted up.’ He was presented with ‘a handsome gents’ dressing case’ as ‘a token of love and high esteem’.

His son Walter Evans was to go with him to Canada, and ‘the young people of the church gather on Friday might to say farewell’.

Albert Evans died in Canada in 1948, but he was still remembered in Scotland, where the local newspaper reported: ‘While resident in Motherwell he was well known at Hamilton Road Methodist Church circles, having served the Church as a Trustee.’

Information from Roddy Devon who belonged to the Motherwell church and was a lay preacher in the circuit, supplied by Morag Fowler.