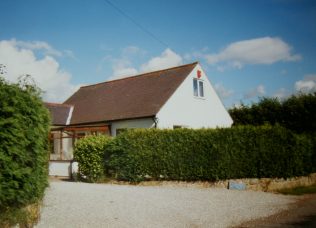 Victoria County History tells us that Primitive Methodists were active in the parish  from the later 1830s particularly in Enchmarsh, where the society had a membership of 12 in 1860 which doubled in the later 1860s. Meetings, camps, and revivals were also held at Blackhurst, Cardington, and Dayhouse. A short-lived (1862–6) society at Cardington was turned out of its meeting place, but in 1869 the Enchmarsh society opened a brick chapel at the north end of Cardington village and became known as the Cardington society. It had 24 members in 1872, the year the chapel was registered for marriages. In 1912 the Cardington society had 12 members, and there were then perhaps three or four nonconformist families in the parish. The chapel was sold in 1951.

At the time of Keith Guyler’s photograph in 2000 it was a bungalow ‘Winscombe’.