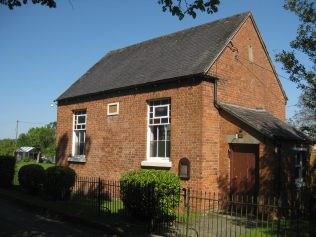 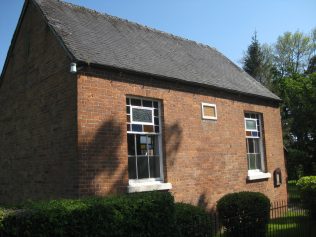 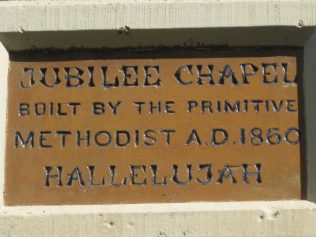 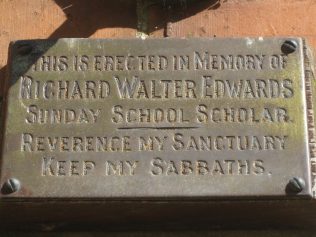 There is a small plaque above the door into the chapel in Memory of Richard Walter Edwards, Sunday School Scholar.

This small chapel is in a very rural spot. The landscape here is very flat with houses and farms dotted along the road between Kinnerley and Pentre. The land for the chapel was purchased for £5.00 in 1860. The building cost £199.00 and there  was a debt of £90.00 when the chapel opened.

Edgerley saw a great deal of activity in the 1860s while the railway was being built. Kinnerley junction was only two miles away. The army was also present in Kinnerley where there was a munitions depot. It is thought that many who attended the chapel were workers from both these sites. The chapel was said to have seating for 100 but bearing in mind its size this was perhaps optimistic.

In 1960 the chapel celebrated its centenary by installing electric lighting and heating. This replaced the Calor gas system.

In 1978 there were 9 members. The chapel is still in use in May 2012. Today you can really see that it did sit on the corner of a farmer’s field as it appears to sit in the garden of the house next door. Perhaps this is not exactly the case but that garden does go round two sides of the chapel and the garden of the house on the other side comes right up to the chapel boundary.