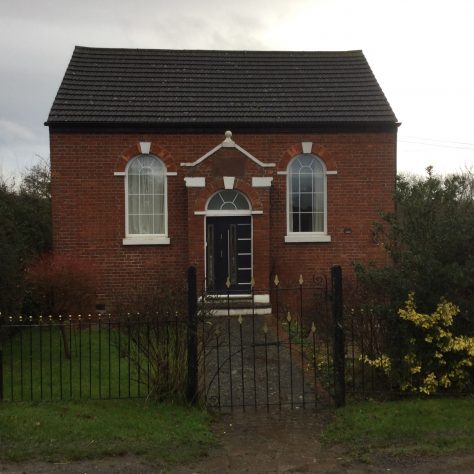 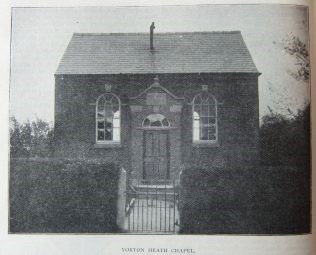 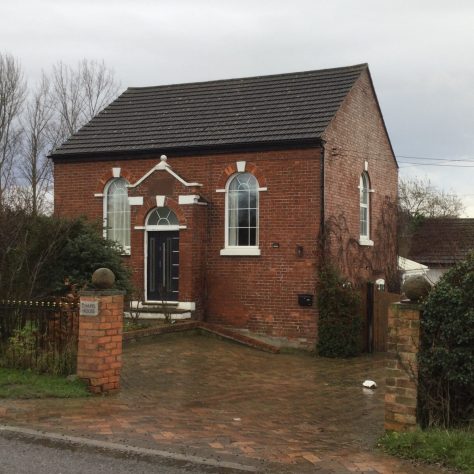 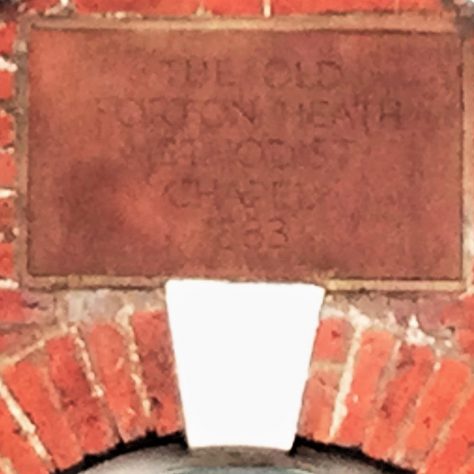 It was sad to see that at sometime past, the original Chapel plaque above the doorway had been replaced with a modern plaque saying ‘The Old Forton Heath Methodist Chapel’ with a date which is hard to decipher. The Chapel was built and opened in 1863, seating 160. In the 1970s  Statistical Returns (1973) the seating seems to have been reduced to 75. The Chapel closed for worship in the early 2000s and is now converted to a domestic dwelling.     Photographs taken by Elaine & Richard Pearce.

“Forton Heath Chapel, Hadnall Station. —Forton Heath is a hamlet about five miles north of Shrewsbury. There are only a few inhabitants in the immediate neighbourhood of the chapel, but a goodly number within a radius of a mile of it. Broomfield, an adjoining neighbourhood, was visited by the Shrewsbury Circuit a few years back, but for reasons not known to the writer, the place was given up.

In the year 1859 it was taken on the Hadnall Circuit’s plan. A society was shortly formed numbering upwards of twenty members, and the good work continued to spread. Early in the summer of 1861 a notice was sent by the landlord of the cottage in which the meetings were held that they must be discontinued. This, with the fact that there was no other cottage to be obtained in the neighbourhood, was very painful to the infant society.

The members, however, were far from being discouraged; they believed that they had found the truth, and felt resolved to worship their Creator according to the dictates of their own consciences. Hence they assembled in the road that they might enjoy a privilege which was denied them in the cottage; and there, sometimes in one part of the neighbourhood and sometimes in another, as was most favourable as to weather, they continued to meet for worship for upwards of two years. Meetings of all kinds were held in the open air, and frequently the people were constrained to say, ” This is the house of God ; this is the gate of heaven.”

Earnest prayer was offered by the society that God would undertake their cause, and open the way for them to obtain a place in which to worship him, and at the beginning of Inst year a suitable site was secured in the neighbourhood of Forton Heath, on which there has been erected a beautiful little sanctuary. To mention all the difficulties that stood in the way of this undertaking would make this article too lengthy,—it must suffice to say that on July 9th, 1863, the foundation stone was laid by Mr. J. H. Walford, in the presence of a large concourse of people, on which occasion a very appropriate and powerful sermon was preached by the Rev. C. Temperton, of Shrewsbury, after which a tea meeting was held on the ground, followed by a religious service, presided over by the writer, and addressed by Messrs. T. Benyon. J. Walford , the Revs. J. R. Taylor, and C. Temperton. The day will long be remembered— it was such a scene as, perhaps, had never been witnessed in that neighbourhood.

On the 27th of September following the chapel was opened for Divine service, on which occasion Miss K. Bennett, of Huxley, preached in the morning and evening, and the Rev. J. R. Taylor, of Primrose Hill, in the afternoon. On the following day a tea meeting was held in the chapel, and a religious service conducted at its close. The concluding services in connection with the opening of the chapel took place on the 8th and 9th of May, 1864. On the former day three sermons were preached, those in the morning and evening by the Rev. W. Peacefull, of Coventry; and that in the afternoon by the Rev. J. Heath. On the latter day, a tea meeting was held in the chapel, followed by a religious service, presided over by Mr. W. Smith, and addressed by the writer, Mr. Cautherington, of Dudley, and the Rev. W. Peacefull. We may say that all these services were numerously attended, much Divine influence was felt, and several persons wore converted in connection with them.

The chapel, which is built of brick, and covered with the best Bangor slate, is 27 feet by 22 feet 6 inches in the inside, and 14 feet 6 inches from the floor to the ceiling, and will accommodate about 160 persons with seats. The interior is lighted up with five circular headed sash windows, two in the front, two in the back wall, and one in the gable end. There is a very neat platform, opposite to which are the rising pews of different sizes, all of which are let and paid for in advance. The whole of the wood-work, both inside and outside, except the roof and ceiling, is well painted, varnished, and finished oak colour.

The chapel is entered by a porch, the inner doors of which are framed and covered with green baize. The front and gable ends are of dressed brick-work, which gives to the building a neat and beautiful appearance. There is a spacious yard in front of the chapel, as well as spare land at the end and at the back of it. so that an enlargement may take place should it ever be required.

The entire outlay is about £264, towards which we have raised, from all sources, upwards of £91. The whole of the hauling was done gratis by the farmers in the neighbourhood, to whom, as well as to all who have in any way assisted us in this noble undertaking, we hereby tender our warmest thanks. Since the chapel was opened the Lord has very graciously poured out his Spirit, and numbers have been converted, so that at the last renewal of the quarterly tickets there were fifty members in society. To God be all the praise. J. Heath.”