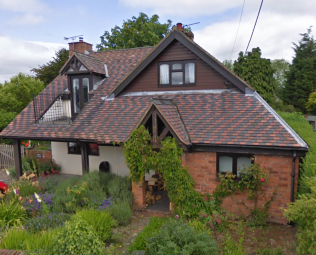 zoom
I live 2 doors away from what was Somerwood Methodists Chapel (now Chapel House) and some 25 years ago it was more or less unchanged until it was bought by a builder and extended. Crow Lane became Chapel Lane when the chapel was built but now it has reverted to Crow Lane.
Bill West (4 May 2019)

“Two backsliders were restored to the joys of salvation” at the opening.

A Primitive Methodist chapel is shown on Crow Lane on the Ordnance Survey maps of 1881 and 1902. By 1958 it is labelled as chapel House and is (probably) still visible on Street View in 2011.