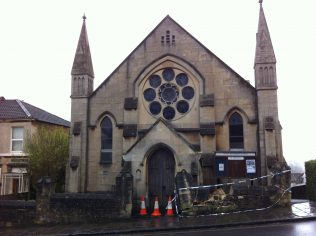 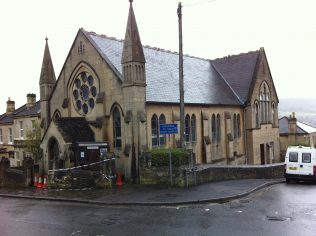 In 2001, the former Claremont Primitive Methodist chapel on the corner of Tyning Lane in north-east Bath joined with Walcot Methodist on the edge of the city centre to form Nexus Methodist church – one church with two buildings.

The foundation stones date the chapel from 1881.  However, ‘Claremont Chapel’ is shown on local maps in the early 1850s across the road, at the end of Claremont Buildings, although there is nothing on this site on the parish tithe map of 1842. In the 1880s that chapel is shown as ‘disused.’

The organ for the new chapel was built by Sweetland of Bath complete with pipes bent to fit under the curve of the ceiling.  It was rebuilt in 1932.

There is a series of foundation stones on the side of the building dated October 3rd 1881 although some are difficult to read because of weathering. The 1881 Primitive Methodist magazine contains a note about the laying of the foundation stones at Claremont (in the Bath station). It tells us that the premises would cost £1,100 of which they had already raised £500 and there was “a sanguine expectation that, by the time the erection is completed  or within a short time after, the whole of the outlay will  be met”

Amongst the names on the readable stones are:

At the time of the picture an accident had brought down one of the gate pillars and part of the boundary wall.