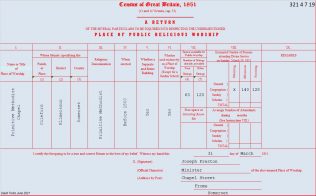 The return from Coleford Primitive Methodist chapel to the 1851 Census of Places of Public Religious worship was completed by the minister, Joseph Preston of Chapel Street Frome.  He tells us that the chapel, built before 1800, held over 180 people.  On Census Sunday 140 attended in the afternoon and 128 in the evening. There was no Sunday school.

“Coleford, Frome Circuit—Foundation Laying.—Oar friends have con ducted service in this place for more than thirty years. During the early part of that period they were very much inconvenienced by the want of a suitable place to worship in. Eventually they rented an old Presbyterian chapel that had been erected during the reign of Charles II., when the Five Mile, or Conventicle Act, was in force. But this they had great difficulties in supporting, and they had once to relinquish it.

About eleven years ago they succeeded in purchasing the chapel, with two cottages and a large garden. In this dilapidated place they have conducted their services ever since. When I came to this circuit, in July, 1861, I found the friends willing to make an effort to raise a new chapel, and a meeting was called, and promises received towards the undertaking. But, owing to circumstances, over which we had no control, the final arrangements for commencing the erection were not made till the early part of this summer.

We first of all formed a new trust, then took down the cottages and chapel, and then left the erection of a chapel and schoolroom to Mr. Ashman. On the 25th of May the ceremony of laying the foundation stone was performed by Mr. J. Lewis, of Downhead, one of our old and tried friends. The friends assembled on the ground at three o’clock, p.m. After the stone had been properly fixed, Mr. Powell read a document, in which were stated the particulars relating to the erection of the old chapel, the names of the trustees, circuit preachers, contractor, and the amount of the contract, which document was enclosed in a glass bottle and deposited in a cavity in the foundation stone.

The Rev. A. B. Beswetherick, of Bath, then stood on the stone and preached an excellent sermon. A tea meeting was held afterwards in the Temperance Hall, and a public meeting followed the tea meeting, and nearly seventy pounds were promised and paid. E. Powell.”

The 1892 magazine reports the laying of foundation stones for a new Schoolroom  at Coleford. They were laid by the new MP.