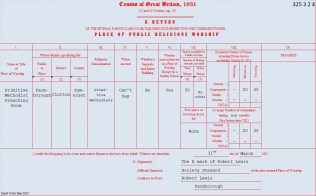 The return from the Primitive Methodist society in Farmborough to the 1851 Census of Places of Public Religious worship shows that the y were meeting in  in a preaching room.. It accommodated around 50 people and on Census Sunday, 20 people attended in the afternoon and 30 in the evening.

“Farmborough, Radstock Circuit.—We opened our new chapel here on the 19th and 26th of August, 1866. The sermons were preached by the Rev. E. Davies (Baptist), of Paulton, the Rev. M. G. Astbury (Independent), of Clutton, and Mr. Luckman, of Bath. The services were well attended, and the collections were as good as we expected.

Primitive Methodism was introduced into the village thirty years ago, and for want of a suitable place of worship, the cause has suffered much, having had to move from one cottage to another. Several attempts have been made to get a site to build upon, but most of the land being in Chancery, none could be had.

Some time ago, several cottages were offered for sale, and we purchased two of the best for £75, and we have converted them into a comfortable chapel, 30 feet by 15, and 15 feet from the floor to the wall plate. It has a good boarded floor, rail back seats and pews, four large windows, and a lobby. The chapel is well ventilated, and the whole finished in a workman-like manner.

The total cost, including deeds, etc., will be about £150. We have not as yet got the one-third, but we are getting up a bazaar, and with that and money promised, we doubt not but we shall come up to rule. We have a Sunday-school, and the chapel is well attended. We have collected £30. Joseph Hibbs.”

On the 1885 Ordnance Survey map, a Primitive Methodist chapel is located on the Batch. By the 1904 map it is marked United Free Methodists. This building still exists in Streetview in 2011 when it is being converted to residential use.