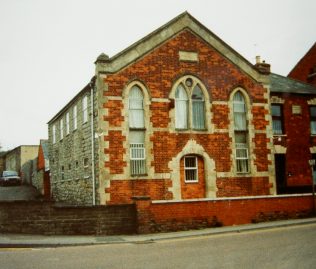 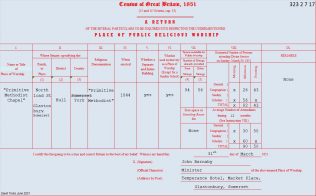 zoom
Glastonbury: return from the Primitive Methodist chapel to the 1851 Census of Places of Public Religious worship. Return no: 323 2 7 17
provided by David Tonks 2021

The chapel in Northload Street was built in 1844.  The opening on Sunday September 29th is reported by E Rawlings in the Primitive Methodist magazine. Preachers were Messrs Powel and Axton,  with Rev FW Meadows speaking at the tea meeting for 100 the following day.

On Census Sunday in 1851, the minister John Barnaby, tells us that the afternoon service was attended by 26 adults and 56 Sunday school children, and the evening service by 43 adults.   It’s capacity was 150.

A house was added for a minister in 1869. In 1888 a new school-room and vestry were added. The Chair at the opening was Mr J Charlton of Frome who had been a local preacher for 50 years.

An application to close the chapel was made in 1968 and on Google Street View the building is shown in 2011 as occupied by the Archangel Michael Soul Therapy centre.

Horace Toogood describes it in May 2015 as “a chapel now converted to a house. Lewis Powell, son of Rev Thomas Powell, was one of the last trustees before the chapel was closed.”