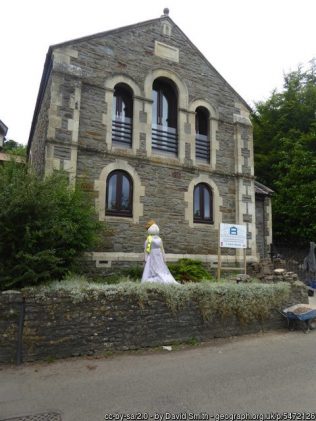 Saltford is a village between Bath and Bristol. Saltford Primitive Methodist chapel was opened on 7th July 1866, when the village had 400 residents. Speakers at the opening included Rev Hobson (Bristol), E Foizey (Frome) WC Pratt (Keynsham) and Henry Overton Wills of the Bristol tobacco family.  He was an active Congregationalist – and a non-smoker. The new chapel seated 120 and cost £250.

HO Wills had also laid the foundation stone on October 31st 1865. After a celebration tea, he then gave an “earnest, spiritual and catholic” address in the Working Men’s Hall – but left before the other speakers had their turn.  He also made a donation.

Previously the society had met in a house for around 30 years.

A Primitive Methodist chapel is shown on Ordnance Survey maps of 1884 and 1902 on The Shallows, opposite the Brass Mill.  By 1930 it is labelled “club”.  On Street View in 2016 the building is in residential use. The date stone is hard to read. Is this the 1866 chapel?