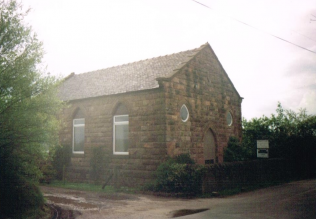 After the meetings on Mow Cop which resulted in the establishment of Primitive Methodism in 1807, Biddulph became a strong Nonconformist centre.  The notes with Keith Guyler’s picture say that the chapel was opened in 1863 and closed in the 1970s.  It is now a house offering bed and breakfast.

However, in the Primitive Methodist magazine of March 1855 there is an account by Samuel Tillotson of the opening of a chapel at “Newtown, in Biddulph-park” on December 31st 1854 – same chapel?; transcription error in the date?

“We are also occupying a schoolroom on rent, as a second place, at Mow, called Mount Pleasant ; we have established preaching in it, and raised a Sabbath-school of more than fifty scholars. We have had sermons and collections for rent, forms, books, and other necessaries ; and though the room will not accommodate more than seventy persons, we realized from 4J. to 51. We have two members, and a prospect of establishing a permanent society. The place is in an improving state, and likely to continue so.”