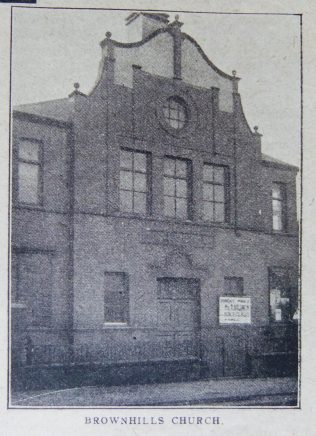 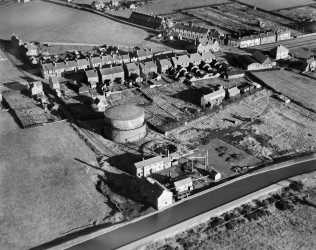 zoom
At the very top of this image can be seen Brownhills'former first Primitive Methodist chapel, with its Manse adjoining it.
Photo supplied by David Evans,courtesy of the successors of Aerofilms

A small society was formed by Richard Ward around 1837 and a small chapel built. Over time a bigger chapel was needed and a plot of land 300 yards square was bought at 62s per yard from Mr Arblaster, an independent church member sympathetic to the cause. The building was undertaken by Mr Croft of Walsall and the foundation stone was laid on August 26th 1856 by JW Round with a sermon preached by J Lawley.

By October “the walls were raised and the roof on without the least accident having occurred”. Building did not take long in those days! A tea meeting was held in the chapel on October 6th; the Trustees anticipated 600 attending.  In fact there were 750 “and some went unsupplied”.

The opening took place on November 16th and 23rd. Sermons were preached by WE Saunders of Tunstall and H Wheeler of Ludlow.

The completed building was 36′ x 30′ and 26′ from floor to ceiling.  It had “a good orchestra behind the pulpit” and was intended to have a gallery in the future.  The cost was £420 and of that £212 had been raised. Donors included “the ex-mayor of Walsall” and Mr Harrison.