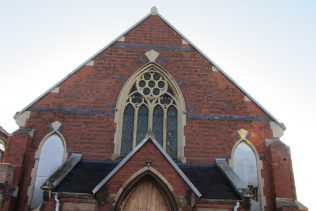 Towards the end of the nineteenth century the congregation at the Victoria Crescent Primitive Methodist Chapel in Burton-on-Trent grew so large that it was decided to purchase the vacant Baptist church and school premises, built in 1877, in Parker Street. John Prince and Mr Baldwin lent the deposit of £50 and money was raised for the purchase and refurbishment of the buildings. Reopened on 10 April 1891 the Church was registered for worship on 25 June 1891. On 8 January 1897 the Church was granted permission to solemnise marriages. In 1914 the freehold of the premises was procured and a new trust was formed.

In 1899 Parker Street became the circuit church of the Burton Third Circuit which included at that time Tutbury, Sutton on the Hill, Church Broughton, Boylestone, Egginton and Hilton. This became known as the Parker Street Circuit.

In the 1920s Parker Street Sunday School played a very important role in the life of the community with over 100 children attending both morning and afternoon sessions. Various Church groups were formed over the years including the Ladies’ Sewing Meeting, Boys’ and Girls’ Brigades, the Women’s Fellowship, the Wesley Guild and the Youth Club.

One of the 1914 trustees, David Prince, a son of John Prince, throughout his life continued his involvement in the Parker Street Circuit, acting as the Circuit Steward and inviting the Sunday School to his farm for their summer outing. His brother-in-law, Robert J Bull, a Society Steward and member of the Finance Committee for many years, and his wife, Ida née Prince, regularly received members for their Quarterly Meetings at their house in Tutbury. Both D Prince and RJ Bull were listed as Third Circuit preachers and some of their children also became preachers.

Parker Street Church celebrated its centenary in 1991 with hopes for the future following further refurbishments. However the last baptisms took place there in 1992 and the last marriages in 1993; soon afterwards the Church was closed.

The building is now in a sorry state with windows broken and boarded up, though the memorial stones of the original chapel laid by local dignitaries in 1879 are still clearly legible. One of them, Henry Wardle Esq, in addition to being a Liberal M.P. and J.P. was a partner in a Burton brewery – an irony considering the temperance allegiance of Primitive Methodists.