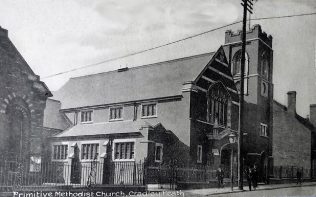 zoom
Postcard of the Church circa 1920
Supplied by Mike Fenton

CRADLEY HEATH  new chapel was opened for divine service on the 17th, 18th, 24th, and 25th of October, 1841.  It is about thirty-three feet by thirty-six, with a gal­lery at one end.  This chapel is very neat and commodious, and is in an excellent situation.  We had eight sermons at the opening, by Brother R, Jukes, Mrs. Grice, Miss M. C. Buck, Brother H. Higginson, and Brother Batty.  The collections and subscriptions were very liberal.

Transcription of Article in the Primitive Methodist Magazine by R. Hind

A striking illustration of quiet persistent courage, and what such courage will accomplish in circumstances difficult almost to hopelessness, has been afforded by the trustees and church at Cradley Heath. Some years ago the chapel there was wrecked completely by mining operations, and the schoolroom also was seriously damaged. To make this misfortune worse there was a debt of £450 on the building, and many of the members had their houses and places of business damaged through the same means as the chapel, causing them to have to set up new establishments at a considerable distance from the place. They have received a little help from some of the Connexional funds for the chapel; but they have also worked loyally and subscribed liberally themselves, with the result that, after paying off the £450 debt, and expending £100 in renovating the school, they have now sufficient balance in hand to warrant them in undertaking a chapel-building scheme. The cost of this will be between £2,000 and £3,000, nearer the latter than the former figure. They deserve, and we hope will receive support from friends outside their own neighbourhood.