You are here: HomenextChapelsnextStaffordshirenextF - InextHarvey Teasdale and the re-opening of the old Friends' Meeting House, Tamworth

Harvey Teasdale and the re-opening of the old Friends' Meeting House, Tamworth 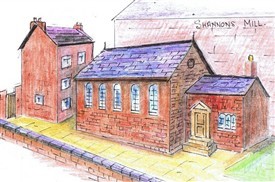 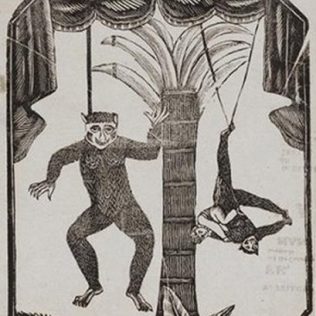 For the second time since the establishment of the Tamworth Primitive Methodist Circuit in 1869 an effort was to be made to establish a permanent presence in Tamworth itself alongside the Wesleyans and United Free Methodists. An ideal venue was found in the shape of the former Friends’ Meeting House in Lichfield Street which had not been used since 1857. The go ahead was given by both the Chapel Committee and the Quarterly Meeting to re-open it as the Tamworth Primitive Methodist chapel and the date was fixed for 3rd January 1886. It was felt that the event required a star attraction and the name of Harvey Teasdale, the former clown and monkey man turned evangelist, was put forward.

Harvey Teasdale was born in Sheffield in 1817. In adult life he became an actor whose most famous role was that of “monkey man” when he would astound audiences by leaping from the gallery onto the stage in his monkey costume. He also took part in outrageous stunts which attracted large crowds, like being pulled in a wash tub by ducks on the River Don and, at other times in his career, he performed in pubs as a clown. On his own admission, he was a heavy drinker. The nature of his lifestyle and his drinking led to an unhappy marriage resulting in his wife leaving with their two daughters who were relentlessly pursued by him who, on finding them, tried to kill his wife. He was charged not with attempted murder but with wounding her with intent to cause grievous bodily harm. Being the consummate actor he was, he charmed the jury but not the judge who, upon Teasdale being convicted of a lesser charge, sentenced him to the maximum of two years hard labour and it was while in Wakefield prison serving his sentence that his conversion took place.

On his release from prison, he joined the “Hallelujah Band”, a group of those converted who had been brought back from “the depths of blackguardiam”. In early 1865, the “Hallelujah Band” was at Sheffield Temperance Hall and it was an event the likes of which had never been witnessed before. There was much shouting, jumping about and gesticulating as well as prayers, singing (not all of it successful) and addresses. To mark his conversion and the ending of the old ways, Harvey Teasdale’s old costumes were systematically cut up on stage the climax being the destruction of the monkey suit which had been filled with shavings and which was held aloft by two members of the Band who stood on a table and vigorously attacked with scissors

The invitation to Teasdale, who had allied himself to the Methodists although whether to the Wesleyans, the United Free Methodists or Primitives is not known, to attend the re-opening was accepted and over Christmas much hard work was done in renovating the premises. The pews had gone and were replaced by seats. Extensive advertising, which strangely made no mention of the Primitive Methodists at all, took place in the local newspaper over a period of 3 or 4 weeks. In no time, the opening day arrived with Harvey Teasdale preaching at the morning and evening services. On the 4th and 5th January he gave lectures on his “Life Story” in which he made full use of two of his skills, oratory and acting. He told of his childhood days, his road to ruin, the wages of sin and his narrow escape from death. In his acting role he re-lived episodes in his life such as being pulled by the ducks in the wash tub, in Wakefield prison and the gin palace.

We know nothing of the impact he made and the following week events assumed normality. There was a belated Christmas Tree Bazaar the following Saturday going over into the Monday. Its conclusion was followed by a lecture given by Rev T Lowe on “Dr Livingstone The Explorer and Missionary of Africa” with tickets at 6d for the front rows and 3d at the back.

Sadly, the second attempt to establish a permanent presence in the town centre failed like the first and by 1890 no services were being planned. Attempts to revive the cause at the former Friends’ Meeting House in 1893 also failed.

Harvey Teasdale died in a workhouse asylum in 1905 aged 86.