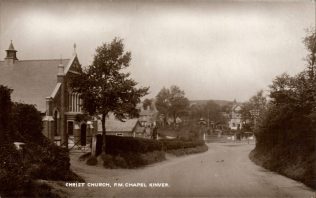 A small Primitive Methodist chapel existed adjacent to the location of the present chapel, which it is understood was made of corrugated iron. So on the archive picture illustrated it is the small building which can be seen behind the new chapel.

A bequest from a retired grocer and tea dealer (Frank Ingham Payne) enabled a new church to be built and be opened in 1962- containing a memorial window to him and his wife. This new building was immediately adjacent to the site of the Primitive Methodist chapel. The former Wesleyan Trinity Church closed.

It is understood that the corrugated iron building remained for a little while used as a Sunday school.