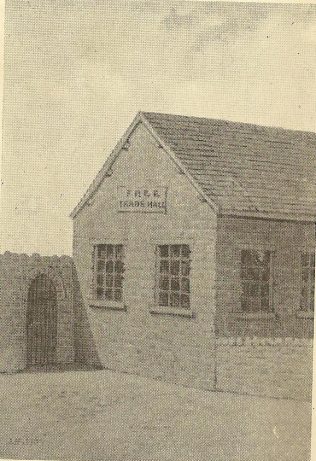 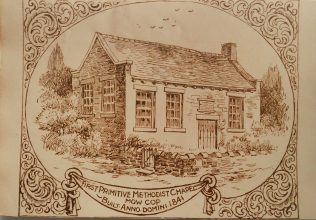 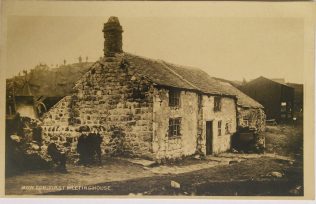 You can read about the chapel that replaced the 1841 chapel on this page.

It is very unusual that the very first church to be built at Mow Cop in 1841 was a Primitive Methodist Chapel. (The Wesleyan Chapel was not built until 1842, and the Anglican Church in 1843.)

Even so, it was nearly 40 years after the first Camp Meeting before the Chapel was built, and when it was finished it was regarded as a great accomplishment.

It was built of local stone, and no doubt Hugh Bourne was closely involved in the building of it.

It was later sold and converted into a kind of Co-operative Stores, when it was known by the high sounding name of the ‘Free Trade Hall’, as can be seen in this sketch, which shows the gable end to the highway.

It had been demolished by 1907, when the site was occupied by the Mow Cop Fustian Factory. However, the date stone from the old chapel was rescued, and can be seen today on the outside wall of the current Methodist Church, which replaced it in 1862. Above it is the inscription: ‘This stone beneath was taken from the 1st Chapel and inserted here by John Shenton of Silverdale 1903’. The stone reads: ‘Primitive Methodist Chapel, 1841. Hitherto Hath the Lord Helped us.’

The Chapel is mentioned in a circular hymn sheet produced for the Jubilee Camp Meeting held at Mow Cop on Sunday 31 May 1857.

Camp Meetings first were held On a Hill.

Camp Meetings first were held On a Hill.

Upon the mossy brow, Of the venerated Mow,

There stands a Chapel now. On the Hill.

In 1887 a reader of the whole 11 verse hymn (of which this is verse ten) remarked, ‘The Camp Meeting lines are really fine, I think, both spirited and greaceful; listened to in the dusk of the evening amid those wild rocks they would have considerable solemnity about them, would they not?’