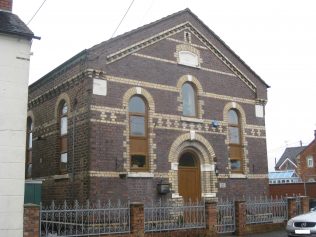 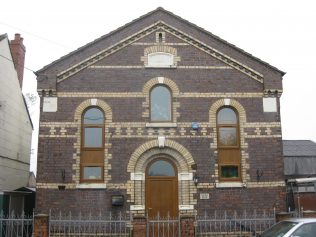 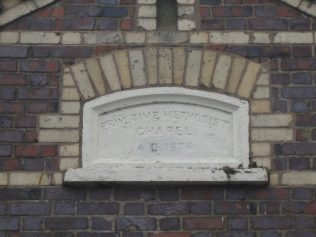 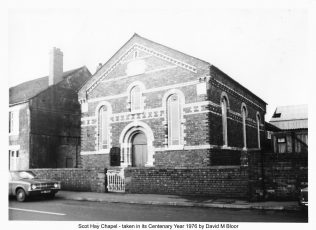 The chapel was built in a decorative style in red and ochre brick. Date of closure is unknown but in 2015 it has been converted into a dwelling.

A few anecdotes about the chapel taken from ‘A Centenary Compendium of the Jabez Stories’ by Wilfred A Bloor.

Scott Hay Chapel had a tremendous influence on the village. One small boy wished he could attend the chapel but he thought he should have respectable clothes to go in. He did not. So each Sunday he watched the children going to Sunday School and wanted more than ever to join them. When the services were held outside on warm summer evenings the singing and the words of the preacher had a lasting impression on him and later he became a preacher himself and finally Pastor of a city church in Minnewauken in North Dakota. This man was Dr Ernest E.Parker. He never forgot how his humble beginnings, in Scot Hay and at the Primitive Methodist chapel, laid the foundations for the rest of his life.

For more than ninety years the Sunday School Anniversary was an important event at the chapel. This was a time for the buying and wearing of new clothes. The Sunday School operated a ‘Clothing Club’ to which the parents contributed weekly. On the day of the Anniversary in May the children dressed in their new clothes and the choir made a tour of the area. This involved a walk of several miles with stops for singing  and breaks for coffee and buns. The celebrations lasted for some twelve hours and included a meal and two services.

At the chapel on cold Sunday nights the old coke boiler was lit and brass oil lamps hung from the ceiling.The harmonium player had to pedal furiously to get volume out of the instrument and the congregation gave shouts of ‘Amen’ ‘Hallelujah’ and ‘Praise The Lord ‘throughout the service. The preachers tramped many miles to keep their appointments. One such, was a miner whose body bore the scars of his work underground. He did not need notes from which to preach as he paced up and down the chapel – the pulpit being far too small a space for him.