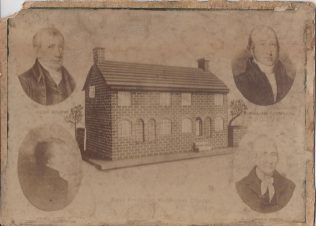 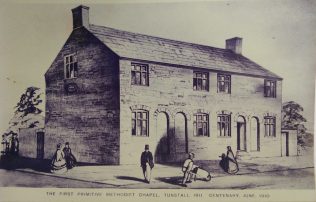 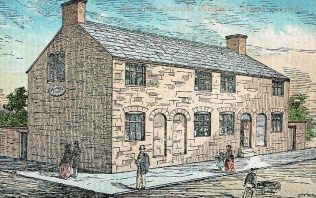 This unusual photograph has just been donated to Englesea Brook Museum by a family whose ancestors were member of King Street Primitive Chapel, Talke Pitts.

It shows the first Primitive Methodist chapel, built by Hugh Bourne at Tunstall in 1811. Being a prudent man, he built it in the form of a row of houses. It had four doors, but no internal dividing walls, and only one entrance. This was so that, if the new movement failed to thrive, the chapel could be sold as houses.

Instead, the new chapel soon proved too small, and was rebuilt in 1859, opening in 1860 as the great ‘cathedral’ of Primitive Methodism – Jubilee Chapel, Tunstall.

Some debate surrounds Tunstall’s claim to be the first chapel, as Boylestone in Derbyshire can make a similar claim.  (See the article by Stella Mills, in Wesley Historical Society Journal, 2012).

1. More information can be found in an article from the Christian Messenger. Notice that the figures in the postcard on this page are different to the otherwise identical coloured picture.

2. The 1834 Primitive Methodist  magazine (page 150) gives more information from T Morgan about the early days.  Because on “Sunday night every aisle and avenue was wedged with human beings”, the chapel built by Hugh and James Bourne in 1811 was replaced 11 years later with a larger building and 11 years later had to be enlarged again. It then measured 45′(w) x 72′(l) with galleries on 4 sides.