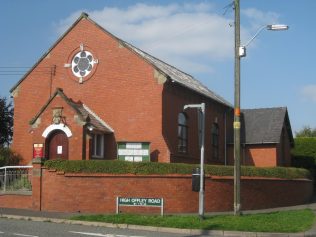 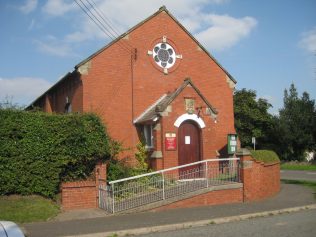 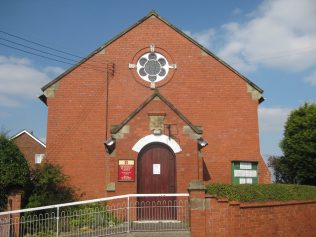 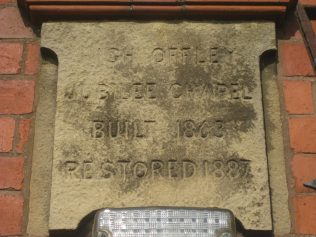 In 2014 this chapel was still open for worship.

“Chapel Opening, High Offley, Stafford Station.—This place was missioned in the spring of 1862, and the word preached was attended by the Spirit’s power, many souls were converted, and a society was formed, now numbering eighteen members, and a Sabbath-school was established, now numbering fifty-eight scholars. Prayer was made to Him who has the hearts of all men under bis control, and he disposed Humphrey James. Esq., of Stockton, to give us the most eligible plot of land in the village upon which to build a connexional chapel and school-room.

On June 21st, the chapel was opened by two sermons by Brother Bateman, of Chorley. On the following day about 160 persons sat down to tea, gratuitously provided, after which a public meeting was held, presided over  by Mr. Gilbert, Wesleyan. and addressed by Messrs. Bateman, Wycherly, and  Bowen. Interesting pieces were sung by our choir from Stafford.

The entire building inside is 37 ft. 11 in. by 22 6- 6 in. The entire cost is nearly £220 towards which we have raised about £73, The trustees affectionately tender thanks to all parties who have aided them in any way, especially to Humphrey James, Esq., for his generosity in giving the land ; to Messrs Boxford for a donation of £5 ; Mr. Child, £6 12s. ; Mr. Joules, £2 2s. ; Miss Wright, £1 6s. ; Messrs. Lockett, Wiseman, Johnson, Warner, and S. James, £1 each ; Mr Bentley, £1 10s. ; to Mr. Ball for his valuable services and donation ; to Mr. Emery, contractor, for the efficient manner he has executed the entire work ; to the ladies who furnished the tables ; to the Stafford Choir for their valuable assistance ; to the Chairman for his able services and donation of £1 ; to Mrs. John Cassell, London, for the beautiful Bible for the pulpit ; and to Mr. and Mrs. Joules for their indefatigable exertions. R Bowen”