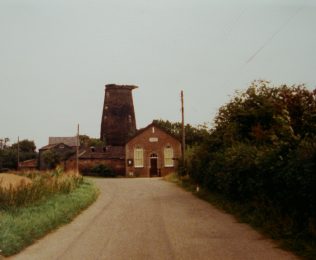 Buxhall is east of Stowmarket.  Buxhall Primitive Methodist chapel was opened in 1875. It stands in front of Buxhall mill.

In Keith Guyler’s photograph in 1986 it looks as if it is still in use.  On Google Street View in 2009 and 2011 it has been converted into residential use – called, inevitably, the Old Chapel.