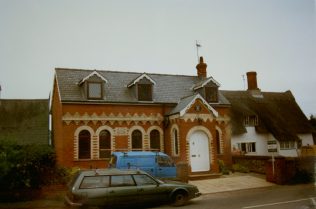 Dalham is east of Newmarket. Dalham Primitive Methodist chapel, known as Ebenezer, was opened in 1894.   Some 20 years previously they had been evicted from their meeting place and had been unable to find a replacement site. Eventually a cottage and adjacent land came on the market and Rev S Blair acted immediately to buy it – only just in time because just three hours after the sale was agreed, the owner had £50 more offered for it, a good offer but too late.  The society erected a chapel and kept the cottage as a source of income.

The chapel closed in the 1980s and at the time of Keith Guyler’s photograph was know as Chapel House.  It is small but on Google Street View in October 2011 it looks very impressive with its different colour brickwork.