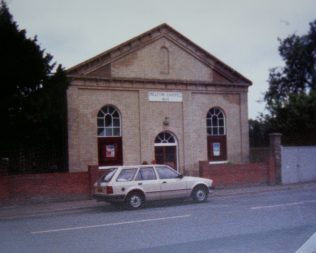 Melton is north east of Woodbridge. Melton Primitive Methodist chapel was established in 1860.  W Ward describes the laying of the foundation stone in the Primitive Methodist magazine. Rev E Jones laid the stone; Revs. J.Rodgers (Wesleyan), H. Scullard, and A. Duffy (Independents) spoke. Too many people came, despite the rain, so they couldn’t fit in the old chapel.

It is not clear when the building changed from Methodist use; Keith Guyler in 1988 describes it as Independent.  It is still there and open on Google Street View in 2011 but it does not appear to have an active website in 2015.

There is a very interesting picture of what appears to be this chapel in the Getty images library.  Entitled “Removal of a chapel at Melton near Woodbridge, Suffolk” it shows a gathering complete with workmen at the side of the chapel, but what are they doing?  Were they moving out or in?  The house in the background retains its side windows and three chimneys.