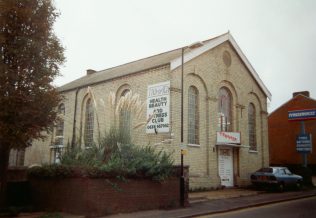 The notes with Keith Guyler’s photograph of Granby Street Primitive Methodist chapel in Newmarket do not say when the chapel which seated 230 people was opened.  However, the area it was in was developed in the years immediately before before 1860 and was completed by 1880.

In Kelly’s Directory of Cambridgeshire in 1904 its ministers were Rev. Arthur Ernest Goodall & Rev. John Dyson.  Its weekly services each Sunday were 11 a.m. & 3 & 6.30 p.m. with a Wednesday week-night service at 8 p.m..

It closed in the 1950s; at the time of Keith Guyler’s photograph in 1993 it was in use as Trimmers Health Club.  On Google Street View in 2008 this had closed and by 2010 there was renovation work and the building was available to let. There are 8 different addresses listed in postcode finder in 2015 so this implies it is probably now used for flats.