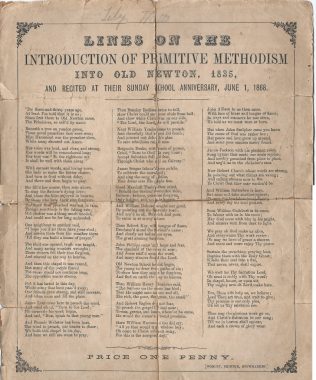 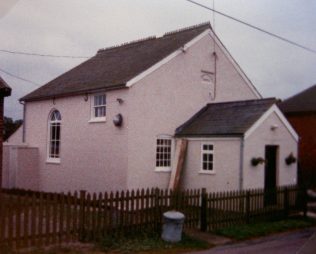 Lines on the Introduction of Primitive Methodism into Old Newton, 1835 and recited at their Sunday School anniversary, 1 June 1868

According to this delightful poem, the first Primitive Methodist missionary to arrive in Old Newton was Miss Hammond, whose ‘earnest words and loving voice’ caused many to choose the ‘better way’.

It tells us that the new society that was formed began meeting in a shed, as the rain rather dampened their enthusiasm for open air preaching.

The next minster James Allison (1859-61) was a hell fire preacher, and the cause seems to have declined under his ‘face of brass and tongue of flame’. Fortunately he was followed by John Sculpher (1861-63) who took a more loving approach. Next to minister at Old Newton was James Jackson (1863-66), and Robert Church (1866-67).

The minister at the tine these line were written and published was William Batterbee (1867-68), and the members were anticipating the arrival of their new minister William Cuthbert (1868-70).

This poem is an amazing record of 33 years in the life of the church. The question is, who was the author?