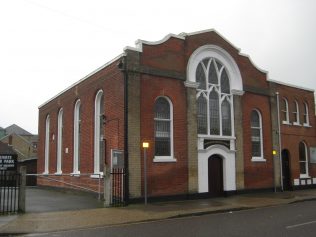 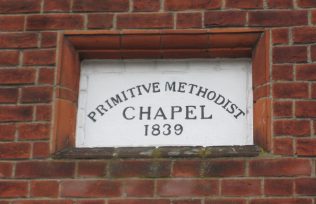 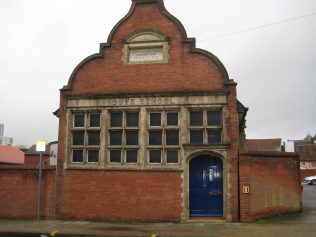 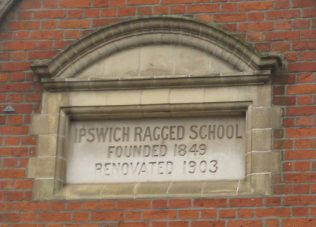 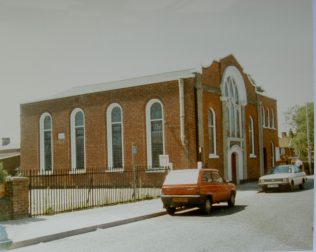 The Rev William Wainwright was instrumental in establishing Primitive Methodism in Ipswich, and this chapel with its ornate windows was opened in 1839, during his time of ministry in the town.

It is still open as a place of worship, as a Seventh Day Adventist Church.

Some 20 years after the opening of Rope Walk chapel, there is an account by W Rudd in the Primitive Methodist magazine of the re-opening of what in all probability is the Rope Walk chapel after considerable enlargement and improvement.

“Ipswich Chapel re-opening.—About thirty years ago it pleased God to direct the steps of the Primitive Methodist ministers to this town, and his blessing has attended their labours from that time downwards. For several years our people worshipped in different rented places, but in the year 1839, six cottages were purchased, four of which were taken down and a small chapel was erected, with an end gallery, on which a debt of £600 was left.

By this heavy debt, in connection with various other things, the efforts of the society have been much retarded ; but they have recently exerted themselves to the utmost for the removal of the debt, and with considerable success. Mr. J. Lear generously promised that upon the discharge of £100 he would give another £100, a condition which was most gratefully accepted by the friends. They entered heartily into the work themselves, and, aided by the liberality of others, together with a grant from the General Chapel Fund, they accomplished their object.

For several years the society and Sabbath school had been gradually increasing, so that the chapel became too strait for them. We accordingly proposed in order to meet the growing spiritual wants of this thickly populated part of Ipswich, and especially to provide for the instruction of many hitherto neglected children, to enlarge the chapel so as to secure the requisite space for both the congregation and the school.

We first commenced a subscription list towards the object, and when we had raised about £50, we had plans and specifications put into the hands of trades men, and soon found that the sum required for the enlargement and other important alterations, would be considerably over £200. This sum we knew could not be raised by our own church, as it is entirely composed of the working classes. But feeling persuaded that Christians of other denominations would help us, our people felt it their duty to ‘ arise and build ; ” they entered spiritedly into the work, took down one of the cottages connected with the premises, and cleaned all the old materials fit for use free of expense.

The contractor unroofed the chapel, took down the front, and the east side wall, and 10 feet on the west side, which part was in a dilapidated condition, and then laid an excellent foundation with concrete; then several courses of 18 inch brick work, while the rest of the work is 14 inches. There are seven good windows in the east, and four in the west. The front is built of the best red brick, with four white brick piers ; the three large windows in front are circular headed, and there is a fanlight over the door and a very neat inscription stone in the gable. The chapel is covered with blue slate, and is enclosed with iron palisading and has a flag pavement in front: the whole has a neat appearance.

The inside is properly fitted up with strong benches stained and varnished, and free sittings, and lighted with gas by 18 burners. The size of the chapel is 48 feet long by 33 feet. 6 inches wide, with an end gallery which will seat about 100 persons. The roof is open, being plastered to the rafters up to the ridge. The beams, ring posts, &c. are stained and varnished.

The re-opening services commenced on Thursday, October 16th, 1862, when a sermon was preached by the Bev. T. Morris (Baptist). A tea meeting was held in the evening, when about 250 sat down to the social cup. After tea we had a meeting of the most pleasing character; addresses were delivered by Major E. Grimwade, the Revs.T. Gay (Independent), J. J. Kelley (North American Indian), and the writer. On the 19th and 26th of October, and Nov. 9th, sermons were preached by the Revs. J. J. Kelley, J. Gay, W. Chapman, and Mrs. H. Chipperfield.

The proceeds of the services, inclusive of the profits of the tea meeting amounted to £26 3s. 9d. ; the total amount raised by collections, private subscriptions, donations, and profit of tea meeting is £160. The cost of the alterations is about £210, besides nearly £10 of work done gratis. We expect to pay £20 more off shortly, and we have agreed with the builder to pay the rest off by instalments, so that the whole debt is to be discharged in twelve months. W. Rudd.”

There was something in this account that really irritated the editor of the magazine, so much so that he added the following note: “[Has it now become a general practice among Christian denominations to pass by their own ministers, so as to have their first sermons preached in new places by ministers of other churches ? Is it good policy to do so ?—Ed.]”

Just around the corner in Waterworks Street is the former Ipswich Ragged School for Boys, which opened ten years after the PM chapel in Rope Walk. Maybe some of the boys who lived in what was a poor working class district of the town were able to benefit from both establishments.