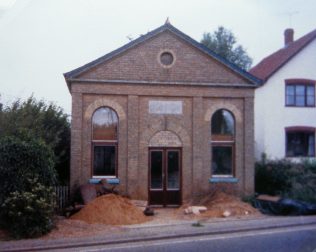 Ufford is north east of Woodbridge; Upper Street is just north of the village. The Primitive Methodist chapel at Upper Street was transferred to the Wesleyan Methodists and then served until it closed in 1987.  On Google Street View in 2011 it is in use as a house.

There is a little confusion about its early dates.  The carved stone over the door proudly proclaims the date 1860.  The notes accompanying Keith Guyler’s picture say that the chapel was built as a Primitive chapel in 1880 and transferred to the Wesleyans in 1889 – but they also say “Prim Kelsall Circuit to Wesleyan 1880.”  You pays your money and takes your choice! Can anyone add some clarity?