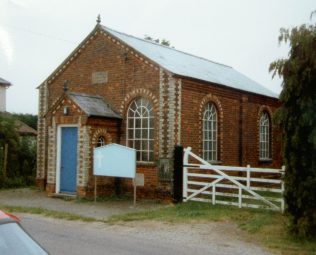 Withersfield is north of Haverhill. Withersfield Primitive Methodist chapel was opened in 1894.

The story behind the opening of the chapel tells of opposition to the Primitive Methodists by the parson and squire. Despite that the society continued, although they could not obtain a plot.  However, in time, the estate passed into the hands of mortgagees and Mr Bridge, the steward bought a plot in the most favourable position in the village.  Ironically it was the very same site that the squire bought at  a “fabulous” price to prevent the Congregationalists building a chapel of their own.

The January 1894 Primitive Methodist magazine tells us that the site was given by Mr H Bridge, the steward of the Haverhill station.  It  confirms that previously, because of “a terribly virulent kind of opposition from squire and parson”, services had been held on the village green, then a stable and then a cottage. Now the foundation stones had been laid for a chapel.

Keith Guyler’s photograph shows it still in use, but it closed in 1996. On Google Street View in September 2011 it looks unloved and not in any obvious use.