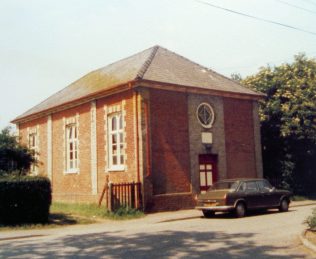 Woolpit is east of Bury St Edmunds. Woolpit Primitive Methodist chapel was opened in 1861.  Previously it had been used by Plymouth Brethren.

William Kirby describes the opening in the Primitive Methodist magazine:

“We have had a small society at this place for many years, which was much inconvenienced for want of a comfortable place in which to worship, but at length Mr. Walter Lord, Sen., offered us land, 45 by 24 feet, in the best situation in the parish, which we gladly accepted, and the land was conveyed to the Connexion. Specifications were prepared, and submitted to the District Building Committee, and sanction to build was obtained.

The foundation stone was laid May 21st, 1861, by Manning Prentice, Esq., of Stowmarket, 250 persons took tea on Mr. J. Ball’s lawn, and the sum of £18 was collected. The building is 33 feet by 24, and 18 feet from the floor to the wall-plate. It is built of good red bricks and white brick quoins. It is covered with blue slates, has a boarded floor, six pews with doors, and ten benches with backs, and good rail seats for free sittings. It is lighted by six windows, 4.5 feet by 7, which open at the top. It is well ventilated, has folding doors, and ah inscription stone. The chapel will accommodate nearly 200 persons, and has cost £193 10s. The treasurer has received £62 2s. 10d., this, with sums to be received, will make one-third of the cost

The  first opening service was held on Friday, July 26th, when two sermons were preached by Manning Prentice, Esq., of Stowmarket. On Sunday, July 28th, Mr. J. E. Hardwick, of Bury, preached morning and evening, and W. Kirby, in the afternoon. On Tuesday, July 30th, the Rev. C. Elven, of Bury, preached two sermons. Great credit is due to the friends in Woolpit ; also to the builder, Mr. Thomas Mace, of Syderstone.“

A historic building report was compiled in 2013 as part of a planning application process.  It has much detail of the building and the development of the Primitive Methodist society in the village.You can see the report on the Suffolk County website.