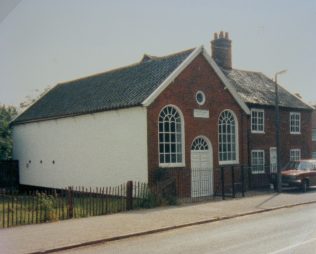 Yoxford Primitive Methodist chapel was opened in 1856. The village had been missioned thirty years earlier, but “aristocratic influence has been a great hindrance to our progress.“

However, on September 7th, 1856 a chapel, 30 ft. by 20 ft, was opened when Mr. H. Gunns, of Yarmouth, preached. The following week, Mr. R. Howchin and Miss Buck of Leicester preached to 2,000 people on the bowling-green belonging to the Three Tuns. After tea for 400, further addresses came from Messrs. R. Howchin, J. Sculpher, M. Tinsley, and Miss Buck.

Overall the chapel cost £100; at the time of opening they had nearly raised the required one third.

The opening was described by Richard Howchin in the Primitive Methodist magazine.

In 2012 the chapel was for sale as a dual property incorporating the chapel and the caretaker’s house which adjoins it.