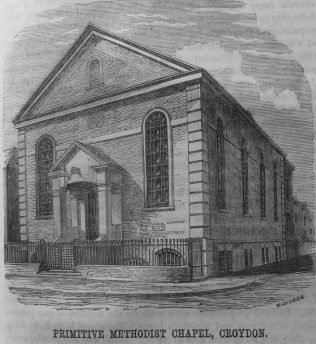 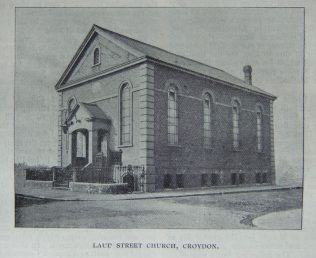 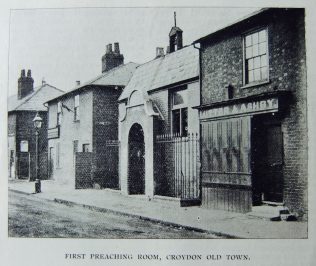 Transcription of Article published in the Christian Messenger

CROYDON is an ancient market town and parish in the diocese of Canterbury, and situated 10 miles south of London; it is a town of considerable importance, having five railway stations and another in progress. The river Wandle, which falls into the Thames at Wandsworth, has its source near the parish church. In the year 1264, during the civil contentions between Henry III. and the barons, the Londoners, who fought for the latter, were defeated with great slaughter here. The ancient palace, near the east end of the parish church, was for many centuries the residence of the Lords Primate; and in July, 1753, archbishop Parker entertained queen Elizabeth here for seven days. “The Old Palace” is now occupied as a bleaching establishment, and the chapel, once attached to it, is converted into an industrial school.

The principal business part of this town is one main street of about a mile and a quarter in length, and contains a number of large handsome shops, and many respectable private dwellings. The outskirts of the town and the neighbourhood in general contain many splendid piles of buildings, elegant seats and villas, belonging to gentlemen, merchants, opulent tradesmen and others. The population of Croydon is between 40,000 and 50,000. This town boasts of a commodious public hall and rooms, erected for literary and scientific purposes; a Hospital of the Holy Trinity for thirty-nine poor people; the Royal Masonic Benevolent Institution for Freemasons or their widows; and several almshouses. The parish church, containing the splendid tombs of several archbishops, has been recently destroyed by fire, but is about to be rebuilt. Beside the parish church, there are several other churches in the town; there are also five Congregational Chapels, three Baptists, and one Wesleyan, one Methodist Free Church, one Presbyterian, and a Roman Catholic.

Some years ago a few Primitive Methodists, from different parts, came to reside in Croydon, and were anxious for our people to mission the place, and about the year 1848, the preachers from London first circuit came here. After preaching some time in the open-air, a small chapel was engaged, and a society formed. For sometime their labours were attended with considerable success, even in the face of much opposition; but from some cause or other there was a declension, and the cause remained in a feeble state for a number of years, the want of a suitable place of worship making against its progress.

In 1861 a piece of land was purchased tor £120, and given by a friend to the connexion. On a part of this land a temporary wooden chapel was built at a cost of about £50. In 1865 preparations were made for the erection of our present chapel, schoolroom, and minister’s house. The chapel is 48 ft. by 32 in the clear, and 20 ft. from floor to ceiling. It will seat 250 people, and is well lighted with 4 star burners, suspended from the ceiling, and 2 branch burners on the platform. There is a good vestry; and underneath the chapel there are excellent school and class-rooms, etc. The building is neat, comfortable, and substantial.

The total cost of the undertaking, including land and incidental expenses is about £1,500, towards which we have raised by various means about £580, including the noble sum given to pay for the land. When the chapel was commenced, the society numbered 34 members; now we have over 70. The congregation has greatly increased, the sittings let well, our prospects are very encouraging and steps are being taken to erect a chapel in another part of the town.

While we are grateful to the giver of all good, we also tender our warmest thanks to all the friends who have helped us in our heavy undertaking.